How Much Does the Local Bookie Make? (5 Tips)
Skip to content

How Much Does the Local Bookie Make? 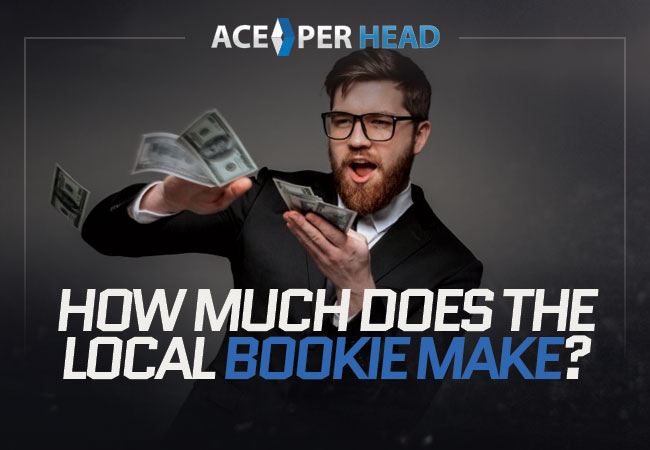 How Much Does the Local Bookie Make?

If you’re involved in the world of sports betting, there’s a good chance that you’ve considered being a bookie. You take bets, make payments, and rake in the money; it seems like an easy enough gig. But exactly how much can you make working as a bookie?

There are several factors that can influence how much your local bookie is making. Read on to learn about what goes into these calculations and how to calculate what your profits as a bookie might be.

How Does a Bookie Make Money?

Before we dive into how much money your local bookie might be making, let’s talk some about how bookies make money. In simplest terms, bookies make money when people lose bets. The larger the bet and the worse they lose, the more money the bookie gets to take home at the end of the day.

Many bets are influenced by odds, meaning that the more likely a scenario you bet on is to happen, the less money you’ll make off it. But from a bookie’s perspective, the more a person bets on an unlikely scenario, the more money they stand to make. They can also make money if players bet on specific scenarios that don’t come to fruition.

Of course, one of the biggest factors influencing how much your local bookies make is the number of players they have. You won’t be surprised to learn that, in general, the more players a bookie has, the more they make. This can change some depending on the level and frequency of the players, but we’ll talk more about that later.

If your local bookie is running bets for just five or ten players, there’s a good chance they’re not making a lot of money. But once they get a hundred or so players betting regularly, they could start making good money. After a few years of work, some bookies can even get up to a thousand players every week and can rake in a serious amount of cash.

Another factor that can change the amount of money your local bookie makes is the “level” of players they work with. Players may bet different amounts, and the more they bet, the more their bookies make. Even if a bookie has more players, if they’re betting at a lower level than another bookie’s players, they may not bring in as much money.

Some players may bet only $25 to $100 a week on sports, which means your bookie will have to bring in more of them to make a solid amount of money. But if they can bring in players betting $250 to $1,000 a week, they won’t have to depend on as many players to make the same amount of money.

In addition to the number and level of players, the other thing that can impact a bookie’s income is how frequently their players bet. To have a steady stream of income, a bookie has to have players who bet on a consistent basis. Ideally, they should have the same group of players betting on a regular schedule.

If a bookie doesn’t have players who bet on a regular basis, they’ll need to make up for that income in other areas. They may need to get more players to fill the gaps or players who bet more to bring in the same income. This may also not be as much of an issue for bookies who manage bets as a side hustle and not a primary income.

All of the factors we’ve talked about so far have depended on how your local bookie’s players bet. But there are some things in your bookie’s control that impact their income. The more they can do to keep their players happy, the more likely they’ll be to keep them coming back regularly.

One of the best things a bookie can do to keep their players happy is paying out reliably. Once someone has won a bet, they don’t want to wait around for their money. Bookies who payout soon and on a reliable basis will bring in much more consistent and high-level players than those who balk on payments.

How to Calculate Profits

If you want to figure out how much the local bookie is making, you’ll need to look at all of the factors we talked about. The basic formula is average number of players per week multiplied by the level of bets. Then you have to figure that the bookie will have to pay some money to players who win their bets.

Learn How Much Your Local Bookie Is Making

Bookies can make great money depending on how many players they have and how their players bet. Believe it or not, a few players making large bets on a regular basis can actually give a bookie more income than a lot of players placing small bets on an infrequent basis. Your bookie can also have some impact on how much they make by making sure they pay out reliably.

If you’d like to learn more about how much your local bookie is making, check out the rest of our site at Ace Per Head. We provide comprehensive pay-per-head services to help you launch your career as a bookie. Create your package now and start bringing in money the fun and easy way.