Can Bookies Operate Legally in the USA?, Pay Per Head Platform
Skip to content

Ace Per Head
»
Ace Blog
»
Bookie 101
»
Can Bookies Operate Legally in the USA?

Can Bookies Operate Legally in the USA? 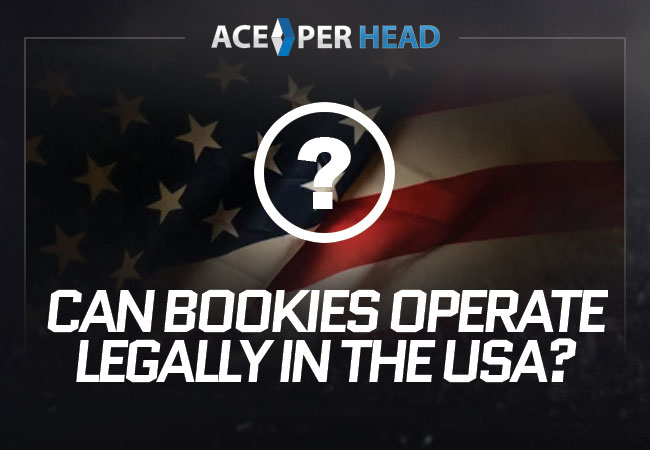 Can Bookies Operate Legally in the USA?

For just about as long as human society has had the leisure time to take part in sports, then there have been people looking to wager on the outcome of sporting events. Whether we are talking about the early Olympic Games, in Athens, or the gladiator fights and the chariot races in Rome, the wagering action back then was likely bustling just like it is today. In modern times, of course, there are a lot more things to wager on.

There are more sports leagues than there were in antiquity, and the idea of the e-Sport likely never even broached the imagination of athletes in ancient times. In our own time, though, it was e-Sports and sports simulations that kept a lot of sportsbooks going during the COVID-19 pandemic. In the United States, estimates of the number of bookies operating businesses go up into the several hundreds of thousands, even though there are only three states in which bookies may operate legally, and there are only a few thousand legally registered sportsbooks.

Bookmakers and the Law

If you are wondering, are bookies illegal in the USA, the answer is still largely yes. The Professional and Amateur Sports Protection Act of 1992 was a federal law that had prohibited individual states from making bookmaking legal. In 2018, the United States Supreme Court struck down that law, but as of this writing, the only states in which you can legally own and operate a sportsbook are Nevada, New York, and New Jersey.

Are bookies illegal in other countries?

There is a wide variety of responses to sports betting all around the world. In some countries, the government has not only made sports betting legal, but it has created a monopoly for itself to maximize tax revenues from the practice. Japan, Canada, Singapore, and Sweden are just four countries that have legalized wagering on sports – but also have made themselves the only legal bookmaker in the nation, ensuring that they will bring in plenty of revenue. In the United Kingdom, bookmaking has been legal since 1961. However, until the Gambling Act of 2005, it was not legal for bookies to go after their bettors for gambling debts, at least through the legal system.

The first modern bookmaker is said to be Harry Ogden, who started a business during the 1790s. The Gaming Act of 1845 limited gambling in the United Kingdom to race tracks only. However, the train industry put together a series of special excursion trains, allowing people to travel to race tracks all over the country. Watching and wagering on horse races became one of the most well-known pastimes for Englanders during this time period.

Today in the United Kingdom, there are about 9,000 betting shops, although, after legalization in 1961, the number initially grew to more than 15,000. They have consolidated since then, with such companies as Ladbrokes, Coral, and William Hill representing the three biggest conglomerates.

What About Online Gambling?

When the answer to the question –Are Bookies Illegal in the USA?- looked like it would remain “yes” for a while, as you can imagine, entrepreneurs started looking to set up online entities to promote as sportsbooks. Antigua and Barbuda enacted the Free Trade & Processes Act, which allowed for online gambling. However, bookmakers did not jump onto the online sports betting craze until 2001. They found that they simply could not afford to stay away; even in 2001, when Internet access was much slower and much less universal, there were a reported eight million people with online sports betting accounts, which meant there was serious money to be made.

As the Internet increased in popularity, many bookmakers established an online brand. There are still some independent bookmakers who have restricted their practice to “bricks and mortar,” preferring to stay “old school” instead of moving online. After all, setting up a sports betting website is complicated, and the cost of either designing a website or taking the courses to design one can be prohibitive.

There are some bookmakers who have gone to pay per head platforms to purchase “skins” or “white-label” online sites. The purpose of this is to give the smaller bookmakers the same sort of professional look as the big books. Platforms such as AcePerHead.com charge bookmakers a fee for each active betting client they have on their lists each week. In exchange for that rate, sportsbook agents (owners) get access to all of the features that AcePerHead.com has already established, instead of having to re-invent the wheel on their own.

There are some bookies who have gone out on their own and either paid a web developer to build their site or have learned how to build it themselves and then finished the job. The problem with this approach is that, even after spending all that money, these sportsbook owners now have to deal with the hassle of servers going out, vetting payment providers, and all of the behind-the-scenes paperwork.

By going with a pay per head platform, all you have to do is focus on the “fun” side of the business. Pick the matchups you want to offer action on each week. Choose the fun side props you want to add in. Set your odds, and then go back in and change them if you need to in order to balance out the wagering. Market your book on social media and on other channels. In other words, pay attention to the creative side of the business, while AcePerHead.com takes care of the mundane tasks. You do have to pay a weekly fee for each of your active betting clients if you sign up with AcePerHead.com. However, that weekly fee is a lot less than the cost of web development software, or the development fee that a professional would charge you. Don’t waste time and money – sign up with AcePerHead.com today!